Open from December to April throughout the 1890s, the Hotel was a lively place with magnificent balls, tea parties, and organized hunts during the winter social season.

"Very well, gentlemen, if you do not agree with me that the hotel will benefit the railroad and the community, I will build it as a personal investment."
– Plant to his business associates, 1887 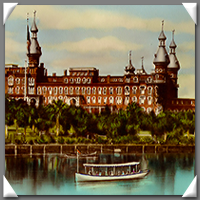 When Henry B. Plant brought the railroad to Tampa in 1884, he opened the door for many businesses to locate and flourish here. The railroad was at the center of the city's economy. From downtown, it ran to Port Tampa City where one could board a Plant Line steamship to Mobile, Jamaica, Cuba, or Bermuda.  Investors were leery of building a hotel of the magnitude Plant envisioned, so Plant decided he would build it himself.

The Tampa Bay Hotel opened in 1891 amid wide fanfare and celebration. The newspapers of the day described it as "brightly illuminated, filled with sumptuous decorations, thrilling music and graced with turrets, domes and minarets towering heavenward and glistening in the sun."[1] This was "Plant's Palace." A spur of the rail line brought the train up to the west front entrance of the Hotel so guests could disembark and walk directly into the lobby.

The Tampa Bay Hotel cost approximately $2,500,000 to build and $500,000 to furnish. Advertised as absolutely fireproof, due to the steel rails for reinforcement and concrete construction, it consisted of 511 rooms.  Some accommodations were suites of three to seven rooms that provided a degree of luxury never before seen in Tampa. Most of the rooms had private baths and all had electricity and telephones.  Guests and luggage traveled between the five floors in two of Florida’s first passenger and freight elevators.  Guests reveled in this atmosphere of heady opulence, surrounded by exotic furnishings, porcelains, Venetian-style mirrors, and sculptures handpicked in Europe by Mr. and Mrs. Plant. The décor was a collection demonstrating such exquisite taste that one writer described it as “a jewel casket into which has been gathered an infinite number of gems.”[2]

Open from December to April throughout the 1890s, the Hotel was a lively place with magnificent balls, tea parties, and organized hunts during the winter social season. Guests enjoyed an array of diversions, including wild game hunting, fresh and salt-water fishing, sailing, rowing, and canoeing. Bicycles and carriages were at their disposal. Rickshaws were available for tours of the property or an afternoon ride to see and be seen. The Hotel also boasted a golf course, tennis and shuffleboard courts, billiards, croquet, and even a racetrack.  The Music Room hosted grand balls and orchestra concerts during the week.  The Tampa Bay Casino, Tampa’s earliest performance hall, seated 2,000 people and billed national and international performers such as Nellie Melba, Sarah Bernhardt, John Philip Sousa, and Anna Pavlova. The Casino also served as a spa with a heated indoor swimming pool located below the removable floor boards to reveal a relaxing oasis.

The Grand Salon, or parlor, was place of inspiration filled with European statues and Venetian-style mirrors. William Drysdale commented that, “gentlemen of the pen who can write a column or two about a snow-capped mountain peak and go into ten-page ecstasies over a sunrise should stand in the middle of the Tampa Bay Hotel parlor and let their immaculate English flow unrestrained.”[3]

A sweeping veranda on the east side of the Hotel afforded guests with a tranquil setting from which to enjoy the view of the Hotel’s extensive gardens.  Following a formal eight-course dinner of fine wine and haute cuisine in the Dining Room, guests could stroll along the serpentine walks that wove through an exotic landscape of tropical flora and garden statuary.  The Flower House, filled with rare plants from all parts of the world, was one of three charming conservatories on the grounds.

Since 1933, the Tampa Bay Hotel has been home to the Henry B. Plant Museum and The University of Tampa.  The building, renamed Plant Hall, is a National Historic Landmark.  The Henry B. Plant Museum holds the distinction of accreditation by the American Association of Museums.  Its mission is to interpret the history and lifestyle of America’s Gilded Age and the life and significant contributions of Henry Bradley Plant to the development of Florida and Tampa Bay.  Original furnishings and artifacts and a dynamic self-guided audio tour immerse visitors in the opulence of the 1891 Tampa Bay Hotel and its rich history.